There are four types of heart rhythm that we (as Community Responders and First Aiders) are taught about. The squiggles that you see on a chart show the varying levels of electrical activity over time and by analysing these, medical staff are able to diagnose, not only specific problems but also the likely location of the problem (e.g. blockage), It’s still mainly a black art to me, but I’m getting there.

This is the normal state of affairs for a heart, when it is beating regularly and is the one that most people will associate with a regular heartbeat, thanks to it popping up everywhere, Medical drama opening credits and documentaries especially. Heart muscle contracts if you apply electricity to it. The more electricity that is applied, the greater the contracting force. It is enough force to squeeze a lump of blood out from the heart and into the Main artery (the Aorta). Thus begins its journey around the body. It is this regular lump of blood travelling along the Arteries that we can detect as a pulse.

This is a straight line across the chart and indicates that there is no electrical activity in the heart at all. Or that you haven’t yet connected the leads. Or that one has fallen off…

If all is well with the measuring equipment, then it would be fair to say that the patient is medically dead.

This strip shows a heartbeat stopping and going into asystole

The heart consists of four chambers. The two at the top are called ‘Atria’ and the two at the bottom ‘Ventricles’. The Left Atrium and left Ventricle work together, as do the right pair. Normally the electrical system causes the Ventricle heart muscle to contract and relax in one smooth flowing movement. However, if electrical anarchists gain the upper hand, each bit of muscle in the Ventricle will contract when it wants. With such disorder, it does not squeeze the blood out effectively and no reliable pulse can be found The squiggles show pretty much random activity. 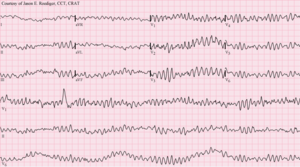 ‘Tachy’ means ‘going fast’, ‘cardia’ is to do with the heart. Says it all, really. Your heart is beating too fast so the Ventricles do not get a chance to fill with blood before squeezing it out. Again, no decent pulse is detectable.

There are other rhythms (or variations of the above) but this is all we need for now. What you need to know is that a defibrillator will not shock NSR (bad move if it tried), It also will not shock Asystole as, generally speaking, shocking it will not help. It will recognise and shock VF or VT in the hope of converting those rhythms to NSR again.

What you also need to know is that since you cannot shock Asystole, if your patient has that, then they are in a pretty bad way, much worse than the others.

Anyway, back to the story..another CFR story…

An elderly gentleman had been out shopping with his daughter. On getting back in her car, he had suddenly gone unconscious. Cue 999 call and I rocked up about three minutes later, immediately in front of a technician in a Rapid Response Vehicle (RRV – as opposed to my people carrier, a SRV).

Can’t do a lot with him in the seat and as there was no trauma involved, neck and spine injuries were non-existent, so we rapidly lifted him out and lay him on the ground. I started CPR whilst the other Responder put his Defibrillator on the patient. His has a screen and we could see immediately that the patient was in Asystole. Nothing the Defibrillator can do (see above), so we crack on with CPR. Every now and again, we stop to check the rhythm, but still asystole. One of my CFR team stops by (happened to be passing) and lends a hand with the compressions.

After, what felt like 10-15 minutes an ambulance arrives. The crew jump out, one gets the handover, the other the stretcher. We lift the patient onto the stretcher and wheel him to the ambulance tail lift, cursing the potholes in the road.

Into the ambulance he goes and with three of them plus the patient and the daughter now inside, I stay outside and tidy up a bit.

It is very difficult (and ineffective) to do compressions whilst on the move, so normally the ambulance crew will work on a patient on site to try and get a heartbeat back or, as is often the case, call it a day after about 20 minutes (the protocol dictates that they try for 20 minutes) and declare the person dead (Recognise Life Extinct or ROLE for short). As our patient had been in asystole for so long, I fully expected the second outcome after 20 minutes or so.

I have been chatting to a couple of off duty nurses (this road seems to be a hotbed for off-duty medics) whilst this is going on and we all agree that the prognosis is not good (they could see and understand the waveform as well). Suddenly, the ambulance blue lights go on, the engine starts up and it takes off down the road. Gone. Just like that. We’re left scratching our heads. Can’t be giving up as that wasn’t 20 minutes and if they were then there would be no reason to then rush off. Can’t be alive as that rhythm was pretty terminal and it was a very quick time for them to have brought him back to a viable rhythm. Perhaps we’ve been dealing with Schrödinger’s cat in disguise.

I caught up later that evening with one of the crew and found out a bit more. Apparently, in the few paces from the pavement to the ambulance, the potholes in the road jolted the heart enough to stimulate it into beating again! They got a rhythm back and so rushed him into hospital for more advanced treatment.

The patient survived (and was conscious) for a few more hours but, unfortunately died later that evening. However, in those few hours the family (including the daughter) were able to have their final chats and say their goodbyes properly. To me, that’s a success of sorts and will have helped the family gain closure.

So ‘thank you’, Council, for your budget cuts, for without them he probably would have died in the back of an anonymous ambulance in an anonymous street.

Perhaps there’s the makings of a dissertation or case study for someone here? Curiouser and curiouser.

This article was first published elsewhere in 2016 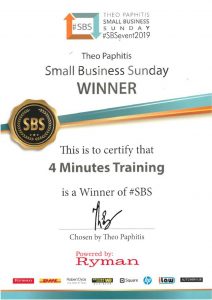 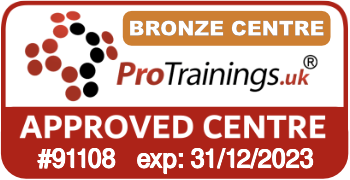